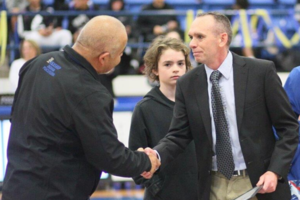 A special recognition was held for assistant basketball coach Sean Allen for his 22 years of service in the U.S. Army Reserve.

Assistant Basketball Coach Sean Allen has given many years to coaching, but it wasn’t his time with athletes the Tigers honored Friday night. Allen, a 22-year veteran of the United States Army Reserve, was issued his retirement orders last week. Coach Paul Page wanted to ensure his service did not go unrecognized.

“Coach Allen is a great coach, but he’s also a patriot and we wanted to make sure to honor him as best we can,” explained Page.

After Senior Night recognitions were complete, Page took center court with the microphone and touted Allen’s service to the country. Allen enlisted in January 1998, he deployed to Kuwait in 2003 as part of Operation Iraqi Freedom and was awarded the Bronze Star for his part in rebuilding Iraq’s obsolete communications network. Allen again deployed in 2010, this time to Afghanistan as part of Operation Enduring Freedom. In addition to the Bronze Star he has received the Army Commendation Medal, the Army achievement Medal (3), the Army Reserve Components Achievement Medal (4), the Defense Service Medal, and multiple other ribbons, medals, and action badges.

Frenship High School Principal Greg Hernandez also presented Allen with a certificate honoring his service from Superintendent, Dr. Michelle McCord and the Frenship Board of Trustees. Hernandez, also a veteran of the United States Army, rendered a salute to Allen at midcourt along with a handshake for a job well done.

The presentation was followed by the singing of the National Anthem by Faith Drake, a Frenship High School junior as the lights were lowered with only a spotlight on the United States flag in a poignant moment for all in attendance.